In the novel coronavirus pneumonia outbreak, Baibuting community held a ten thousand household banquet on January 18, there are more than 40000 families gathering together joyfully. (Guangming Daily Website, “Baibuting community of Wuhan: Residents cooked 10000 family banquets to cheer up for a better life”, January 19, 2020), a total of about more than 130 thousand people participated in the banquet. This is a great social activity under the situation that the nature of human to human transmission of novel coronavirus pneumonia is already very obvious, and some people have proposed to abolish the activity, but the local government insisted to hold it.

On February 9, online there was a person claimed to be “the resident of Baibuting garden Baibuyating” for help, saying that “in order to cover up the fact that many people in Baibuting are infected with the virus, Baibuting only gives one place for nucleic acid detection in a grid every day” to reduce the number of infected people.

Soon on February 13, Wuhan Internet and information office issued a “rumor refutation”, saying that “no one has been confirmed or suspected cases of NCP among the people who attended the banquet.” At the same time, it said, by February 8, “87 cases confirmed and 113 cases suspected”. After Dr. Li Wenliang was falsely accused of “rumor maker”, we know who, the official of Wuhan or the resident of Baibuting, is more credible. It is worth noting that it is obviously an untrue word to say that “no one who participated in the banquet has been diagnosed”. If it was true, this abnormal phenomenon seems to need the explanation of the banquet organizers: what’s the panacea on the banquet which could avoid the infection of the new coronavirus. Officials say 87 cases were confirmed on February 8, apparently a cunning trick to delay the diagnosis and keep the cases number down.

Until now, we are shocked that in the mobile phone version of the epidemic area map, most provinces and cities have real-time information publicity specific to communities, only Wuhan, the center of the outbreak, has not, and   in Hubei Province, only Huangshi has the epidemic information of communities. From the point of view that Wuhan municipal government has never apologized for its insistence on holding ten thousand banquets, it also wants to cover up its own mistakes and continue to insist on the mistakes by suppressing the information disclosure of epidemic situation in all communities in Wuhan, including Baibuting community.

It seems that the former leaders of Wuhan municipal government have become obsessed with the wrong idea of suppressing information dissemination. They really think that if they continue to suppress Baibuting’s information, they can cover up his mistakes. The virus will not stop spreading because of illegal deletion or shut WeChat accounts down by government officials. As long as there is close contact between people, it will spread. People outside Baibuting will also make an estimate of the spread of the virus at a banquet and its subsequent impact according to the spread rule.

As for Baibuting, I mentioned in the article “We need transactions while  epidemic prevention”, holding a banquet of ten thousand families makes the number or possibility of infection 2-4 times that of not holding. Now we use the “ten dimensional perspective spatial economics and institutional economics planning model” (SIEM) to make a more detailed simulation of the situation of the ten-thousand-family banquet. Baibuting covers an area of about three square kilometers, with a population of about 130000 and a population density of about 42000 people / square kilometers. We assume that the banquets are held in a 30 hectare area. At this time, the dynamic population density is about 430000 people / km2, and the average distance between people is about 1.5m. The assumed infection rate is 1.19. After the closure of Wuhan, the probability of transaction decreased to 1% of the original, and the transaction cost increased by 36% of the average price.

Note: the part of the picture that is significantly higher than the surrounding area is the number or possibility of infection when Baibuting held the banquet of ten thousand families.

The results are as follows.

I. A simulation of the banquet of the ten thousand families held in Baibuting on January 18, 2020

Figure 2 Comparison of the number of infected people when hold or did not hold ten thousand families banquet on January 18, 2020

Figure 3 Comparison of the number of infected people when held or did not hold ten-thousand-family banquet on January 22, 2020 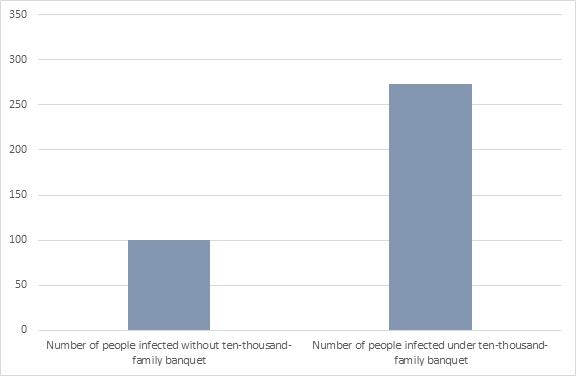 Figure 4  Comparison of the number of infected people who have held or have not held the ten-thousand-family banquet on February 16, 2020

For Wuhan municipal government’s wrong behavior of persisting in holding this activity on the premise of knowing the epidemic information, and continuing to suppress the disclosure of Baibuting’s epidemic information in the afterward to cover up its previous wrong behavior, of course, it should be liquidated; but more importantly, we should learn general lessons from it, resolutely implement Article 35 of the constitution, and analyze the ten-thousand-family banquet of in Baibuting under the condition of sufficient information, so as to make it clear to people that, in the case that the nature of “human to human” transmission has been basically clear, it is absolutely prohibited to continue to organize and carry out the extremely wrong nature of the behavior that leads to a high concentration of people.

This model is based on poor data conditions, and the conclusion is only a general judgment, which cannot be accurate to the specific number of people. However, the basic conclusion of this simulation should be undoubted, that is to say, holding large-scale gathering activities during the outbreak will certainly aggravate the infection of the virus, and the probability of “no one was diagnosed” is almost zero.

Lies can be exposed by the truth, sometimes by logic and models.